A contingent of young American talent will be coming through Philadelphia to test the Freedoms’ resolve in the early stages of the 2019 World TeamTennis season. The Freedoms take on the San Diego Aviators on July 15, the Orange County Breakers on July 16, the Las Vegas Rollers on July 17, and the Orlando Storm on July 19, in what will be a star-packed week.

When the San Diego Aviators meet the Freedoms in Philadelphia for the home opener, they will be bringing with them a trio of young Americans eager to stop the party at Hagan Arena. The Harrison brothers, Ryan and Christian, will be uniting for the first time in World TeamTennis, but they are certainly no strangers to competing together on the court. The Harrisons reached the third round of the 2018 US Open together. Another young Aviator, Kaitlyn Christian, joins the Harrisons at the peak of her career. A doubles specialist, Christian reached her best result at a Grand Slam earlier this year when she reached the third round of the 2019 Australian Open. Christian is familiar with both the hard court and the silver screen, serving as Emma Stone’s body double in the 2017 film based on cultural icon and Freedoms owner Billie Jean King’s legendary match, Battle of the Sexes.

The Orange County Breakers roster boasts a name that has been known to World TeamTennis fans for a few years. Nicole Gibbs, the 2016 MVP, has made a fantastic recovery after being diagnosed with cancer earlier this year, which caused her to miss the French Open. Gibbs, a veteran of the league, has matched up with the Freedoms in the past and will be eager to take down the Freedoms’ Taylor Townsend, the reigning MVP.

The Las Vegas Rollers want to start their inaugural season off hot, and have loaded up their roster accordingly. Leading the way in the Freedoms first matchup with the Nevada-based club will be Reilly Opelka, the current USA #4, and Taylor Townsend’s frequent doubles partner Asia Muhammad. Opelka, the tallest player on the ATP tour at 6’11”, picked up a milestone career victory in February when he won the 2019 New York Open. His physical stature rivals that of his serve, with his large frame enabling him to blast openers past his opposition. As for Muhammad, she has been successful in doubles competition with two of her 2019 wins coming alongside Townsend.

Whitney Osuigwe of the Orlando Storm, the second expansion franchise in World TeamTennis this year, has enjoyed a back-and-forth rivalry with the Freedoms’ Taylor Townsend since meeting in Charleston last year. The record between the Freedoms’ MVP and the world #2 U18 player is split 2-2, with neither player winning back-to-back matches. 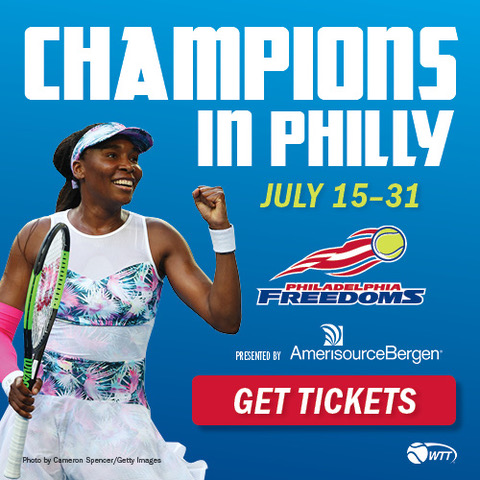